The Oldest School in the World

Education is the future: the way we teach our children and students today shapes the world for generations to come. That’s why we’ve built a methodology to help students find the best online schools where they can get high-quality, affordable, and flexible college degrees. That’s where the future of education is.

But education is also our past. From hand-me-down wisdom to radical teaching methods, the history of schooling has shaped the world in which we live today. There is a rich history of education throughout the world dating back hundreds of years. Lessons taught in these schools helped enlighten and advance humankind back then. Today, we look to these schools as evidence of the importance of education.

Below is a list of the longest-surviving schools and universities in every country in the world. You might be wondering, what is the oldest school in the world? Well, that honor goes to Shishi High School in China, which dates to 141 B.C. It’s just the beginning, though – there are many more old schools still in operation today. 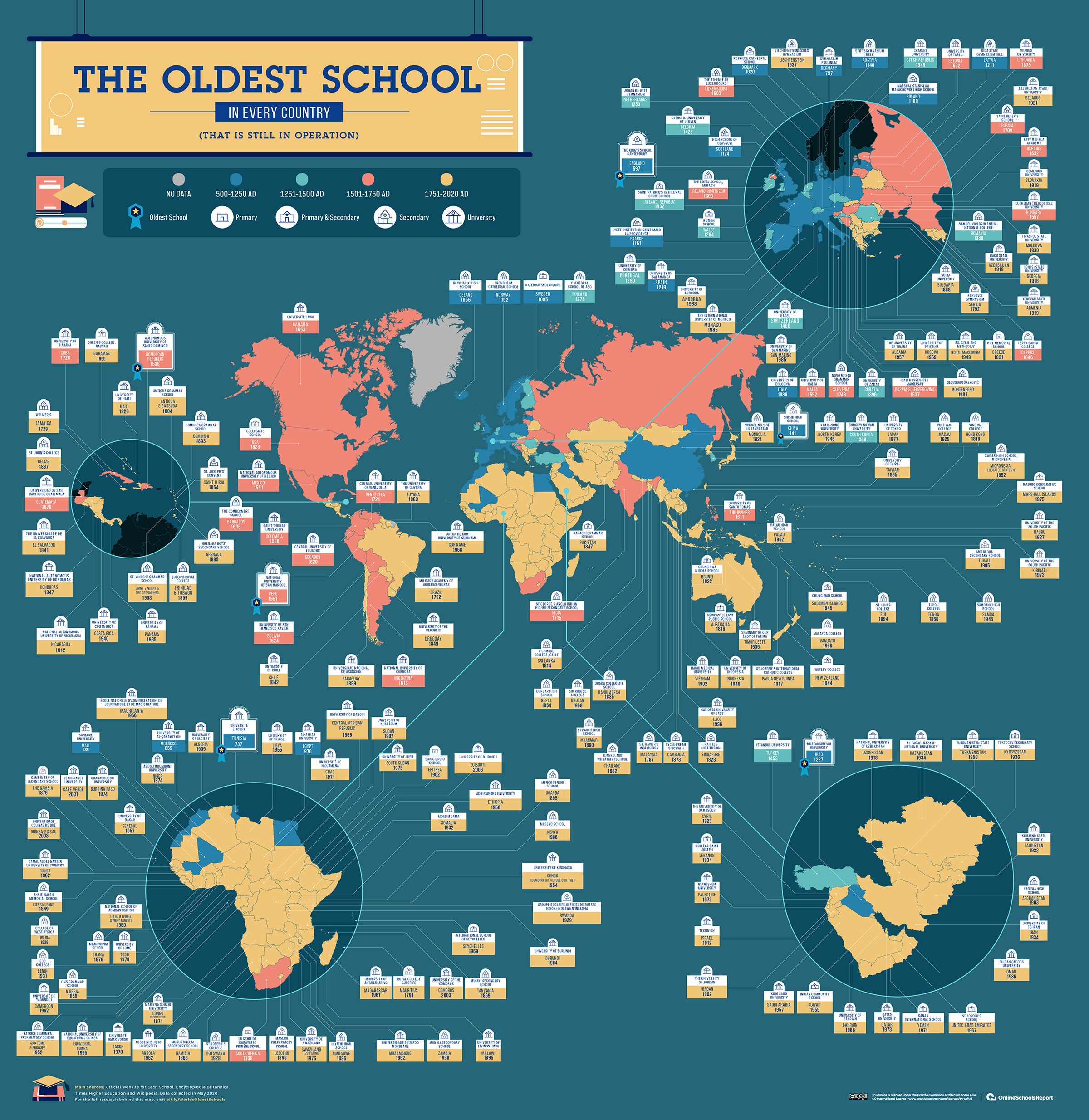 The Top Ten Oldest Schools in The World

The very oldest schools in the world are mostly divided between Europe and Africa. In fact, Europe is home to 19 schools that are more than 500 years old. Africa has four universities that are over 1,000 years old. Still, there is a big gap between Sankore University in Mali (989) and the continent’s next oldest school, which was founded more than seven centuries later. Yet, as noted earlier, the oldest school in the world is in Asia – Shishi High School in China, as shown below:

Yet, Europe and Africa aren’t the only continents with old schools. In fact, there are schools hundreds of years old on every continent in the world (except Antarctica, of course). Below is a summary of the oldest schools in the world.

The oldest schools in the Americas are relatively young. Before colonization, an advanced system of Native American education took place in ‘real world’ settings such as the farm or home, led by family members. These real world settings gave kids of grammar school, primary school, and secondary school ages the hands-on experience they needed to survive.

The oldest school in America (of European founding) was founded by Spanish Roman Catholics in 1538, by decree of Pope Paul III. Autonomous University of Santo Domingo still thrives as the oldest existing university in North America in what is now the Dominican Republic.

In 1638, schoolmaster Adam Roelantsen traveled from Holland to the American Colonies. He worked with the Dutch West India Company and Dutch Reform Church to co-establish the Collegiate School in New Amsterdam, which became New York in 1664. Today, Collegiate is the oldest independent school in the United States with a founding date of 1638.

Fun fact: The oldest public university in the United States is a title claimed by three different schools – the University of North Carolina at Chapel Hill, the College of William and Mary, and the University of Georgia. 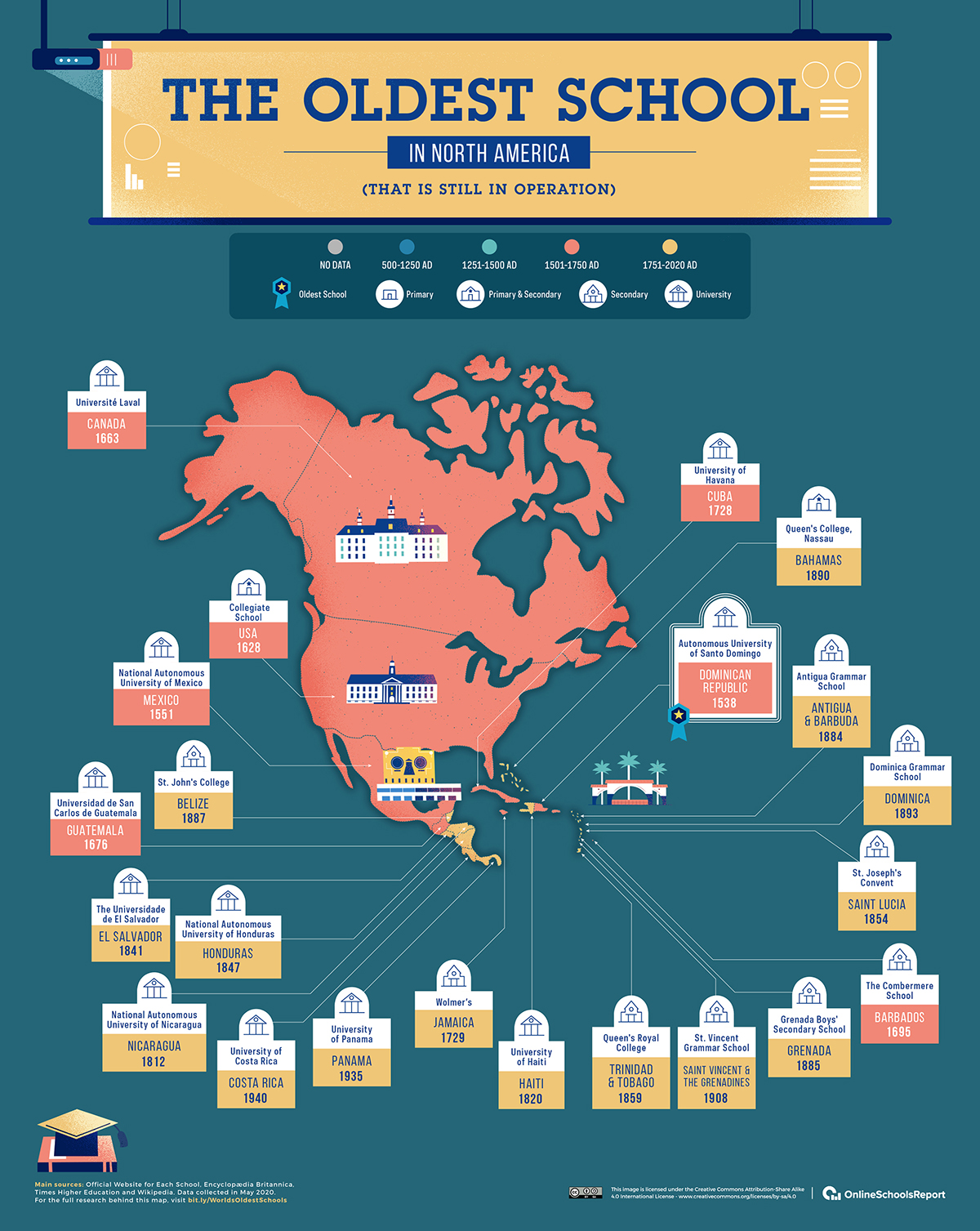 The world’s earliest ‘university’ is in Italy. Although Africa has older institutions of higher education, the University of Bologna (1088) was the first to refer to its scholars and teachers by the Latin term, universitas. When the school opened, Catholics considered scientific knowledge to be a gift of God that could not be ‘sold.’ Instead, students paid teachers a donation (colectio).

The United Kingdom – England, more specifically – is home to the second-longest surviving institution in our study. Just a century after the fall of the Roman Empire, Augustine of Canterbury – one of the founders of the English church – established what would become known as The King’s School (597). But this isn’t the only school of note in Europe. In fact, Europe is home to an educational institution or two that is held in very high regard: 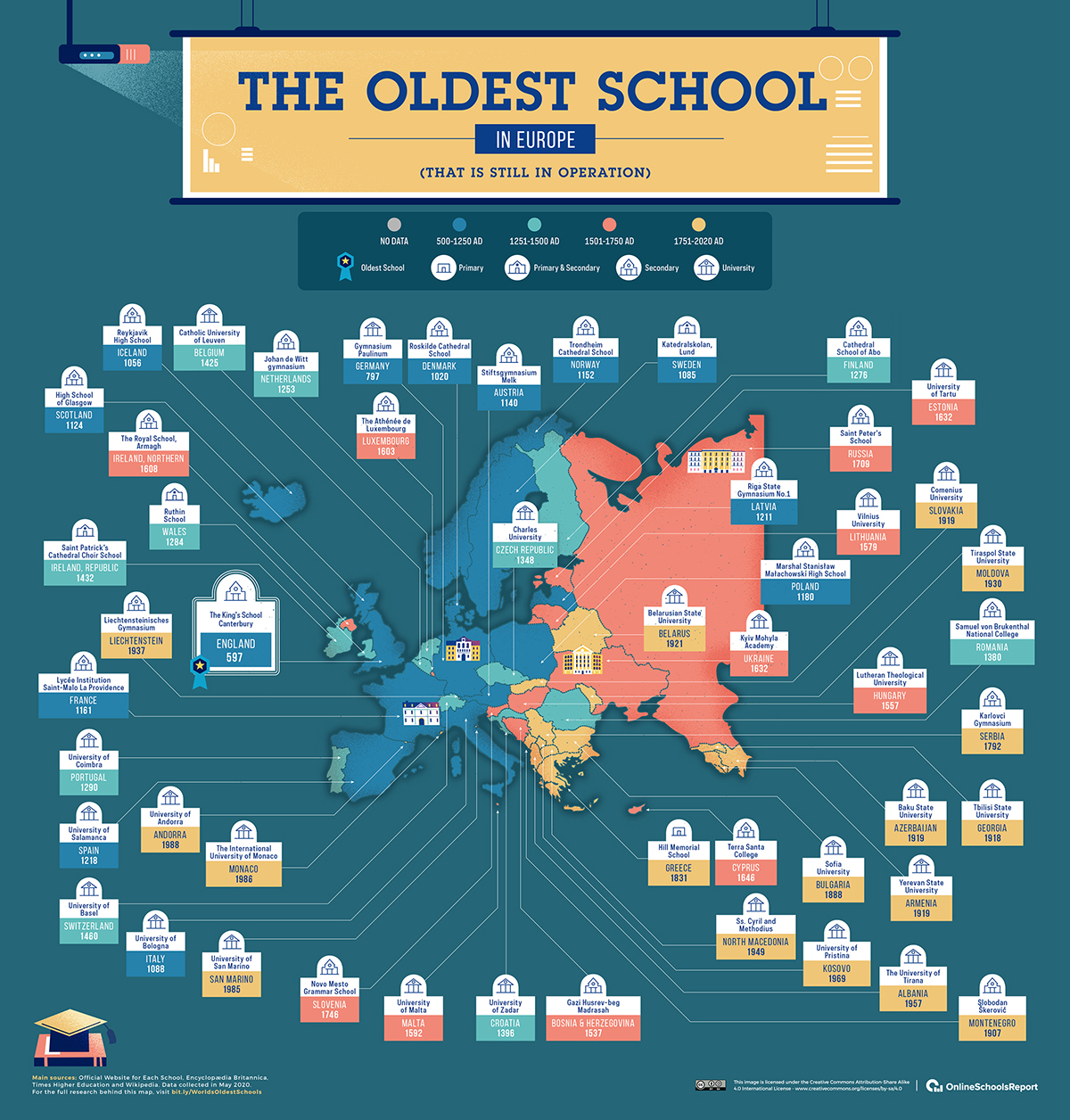 South America’s oldest school is National University of San Marcos in Peru (1551). Originally known as Universidad de Lima, this oldest institution was founded to meet the demand for education from both monks and laypeople. The school has been led by 216 rectors without a gap, from Fray Juan Bautista de la Roca 500 years ago to Dr. Orestes Cachay Boza today.

Bolivia’s University of San Francisco Xavier was founded on March 27, 1624, ‘rubber-stamped’ by Pope Gregorio XV and King Felipe III. The opening ceremony concluded with the sound of chirimías and trumpets. The original curriculum covered various topics, including:

Students at this university also studies the indigenous Aymara language. 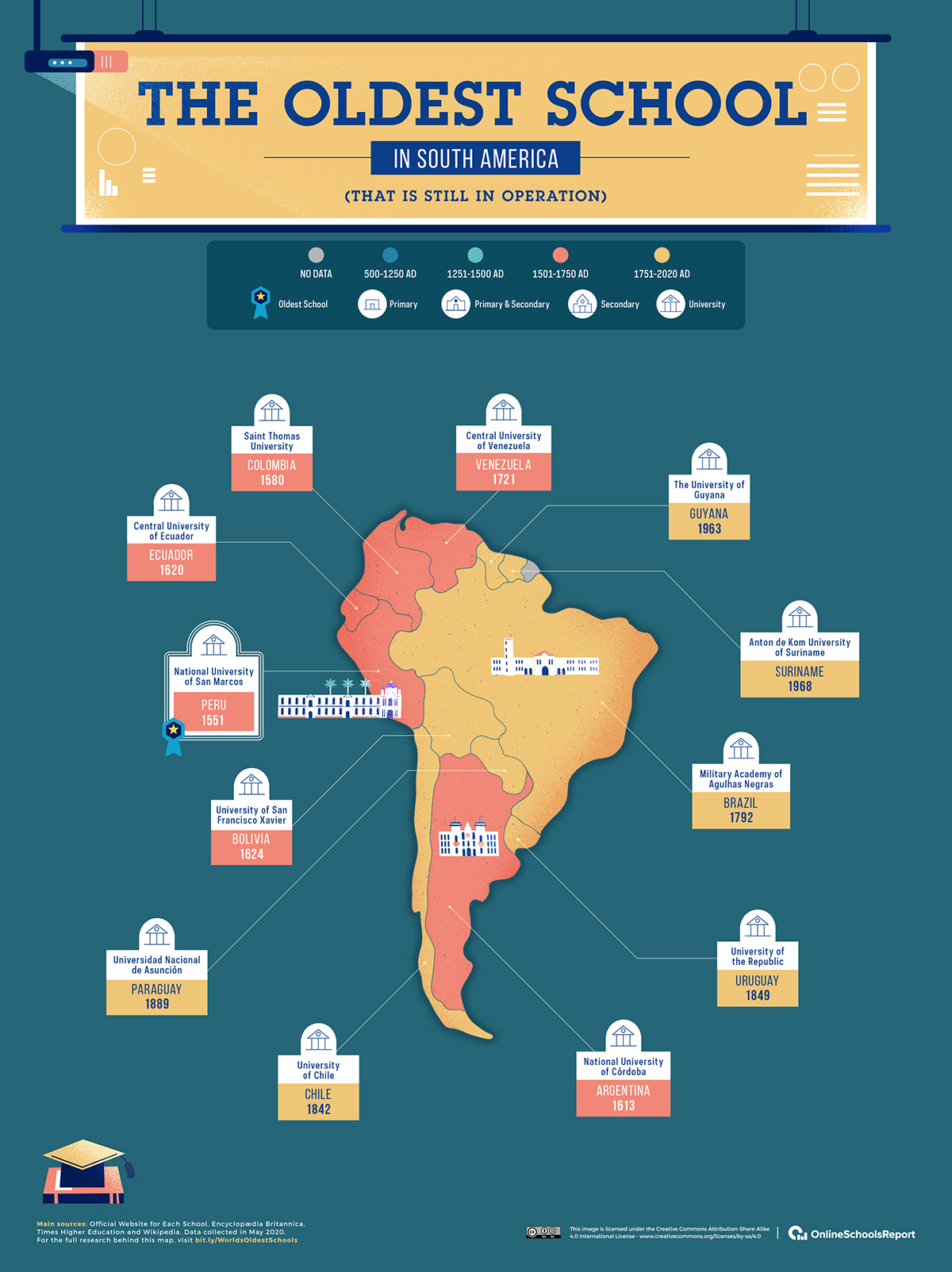 Mustansiriyah University is Baghdad’s “great survivor,” according to locals. The Abbasid Caliphate built the school’s beautiful premises between 1227 and 1234 when Baghdad had a multicultural population of over a million people. The university and its architecture have survived the rise and fall of empires, regime changes, and drastic urban modernization to make it the oldest school in the region. 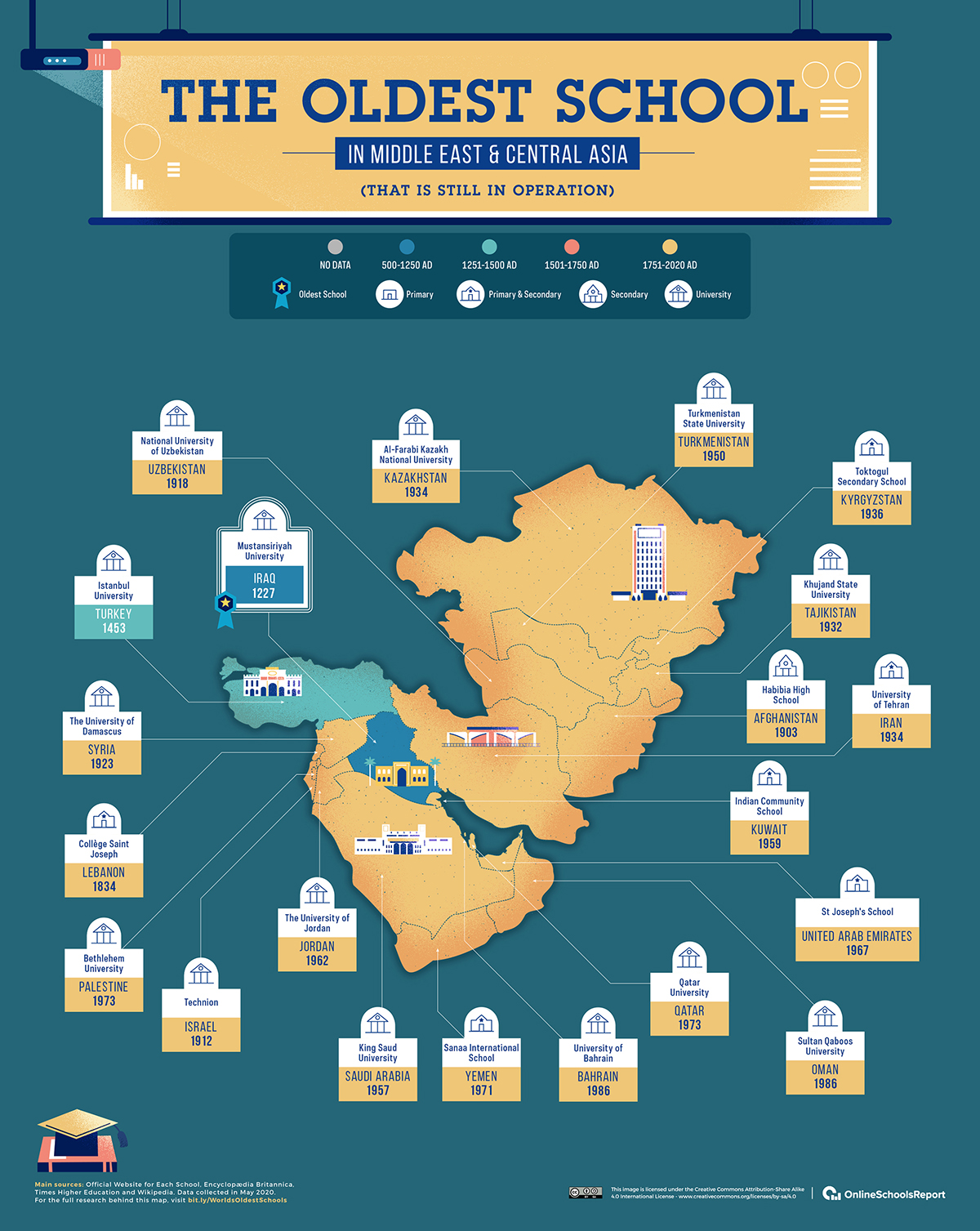 The Rest of Asia & Oceania

Sungkyunkwan University in South Korea opened in 1398. East Asia’s oldest university was founded to develop a scholarship in Confucianism. Its name means, “An institution for building a harmonious society of enlightened human beings.” 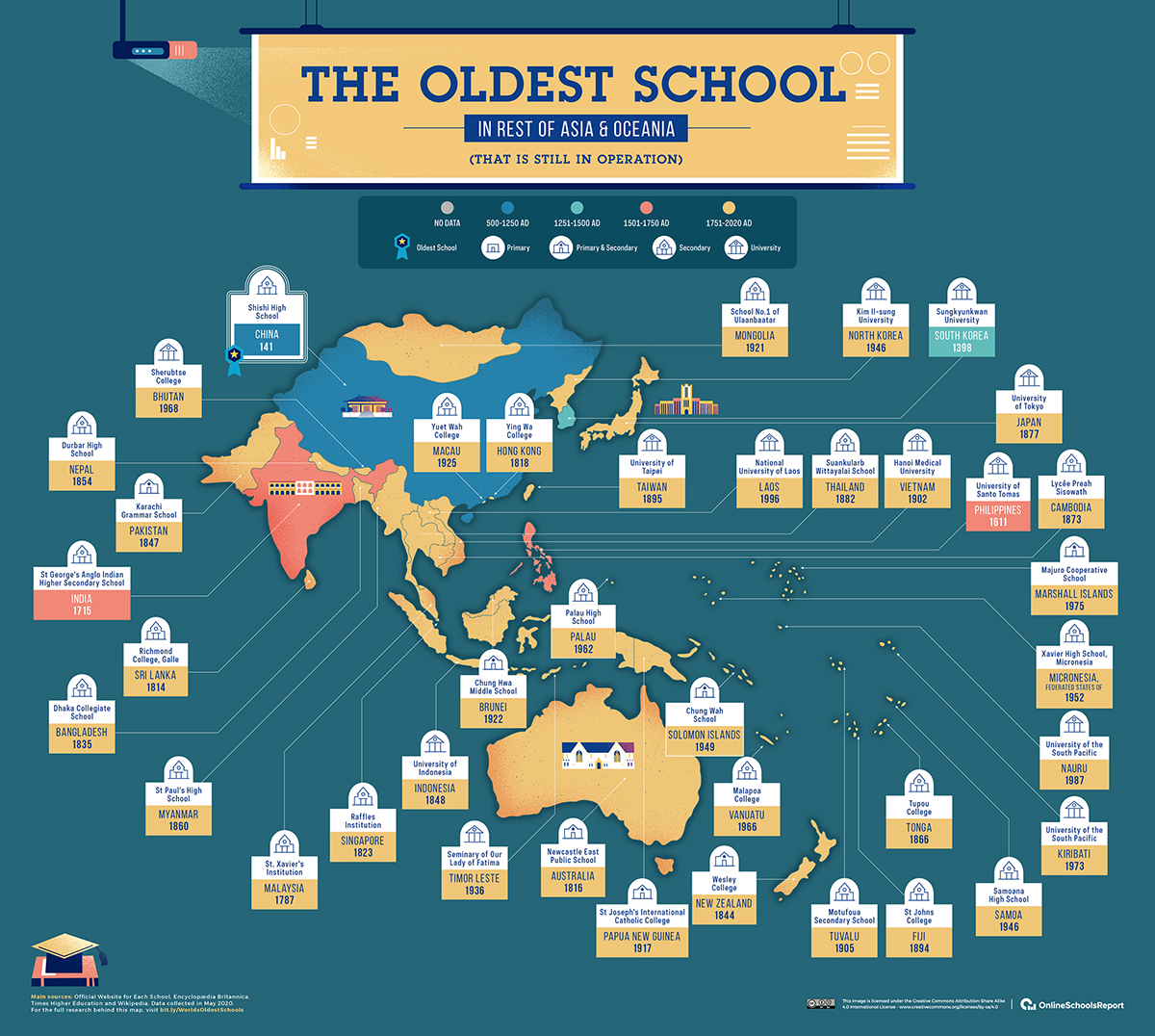 Université Zitouna in Tunis can claim to be the world’s oldest university. Ubayd Allah Ibn Al-Habhab founded the Zitouna mosque in 734, and teaching began in 737. Tunisia’s French colonizers later saw the school’s importance to Tunisian culture and identity. They tried to reform it, but efforts to protect Zitouna’s unique pedagogical approach have since been enshrined in law.

Guinness World Records and UNESCO list the world’s oldest school as University of al-Qarawiyyin (also known as al Quaraouiyine) in Fez, Morocco. Al- Qarawiyyin, which was established by Fatima al-Fihri, gets the stamp of “first university” because it has been in continuous operation since 859. However, this is based on the idea that reform and renaming of Université Zitouna in the 20th century counts as the closing of the old school and the opening of a new school. 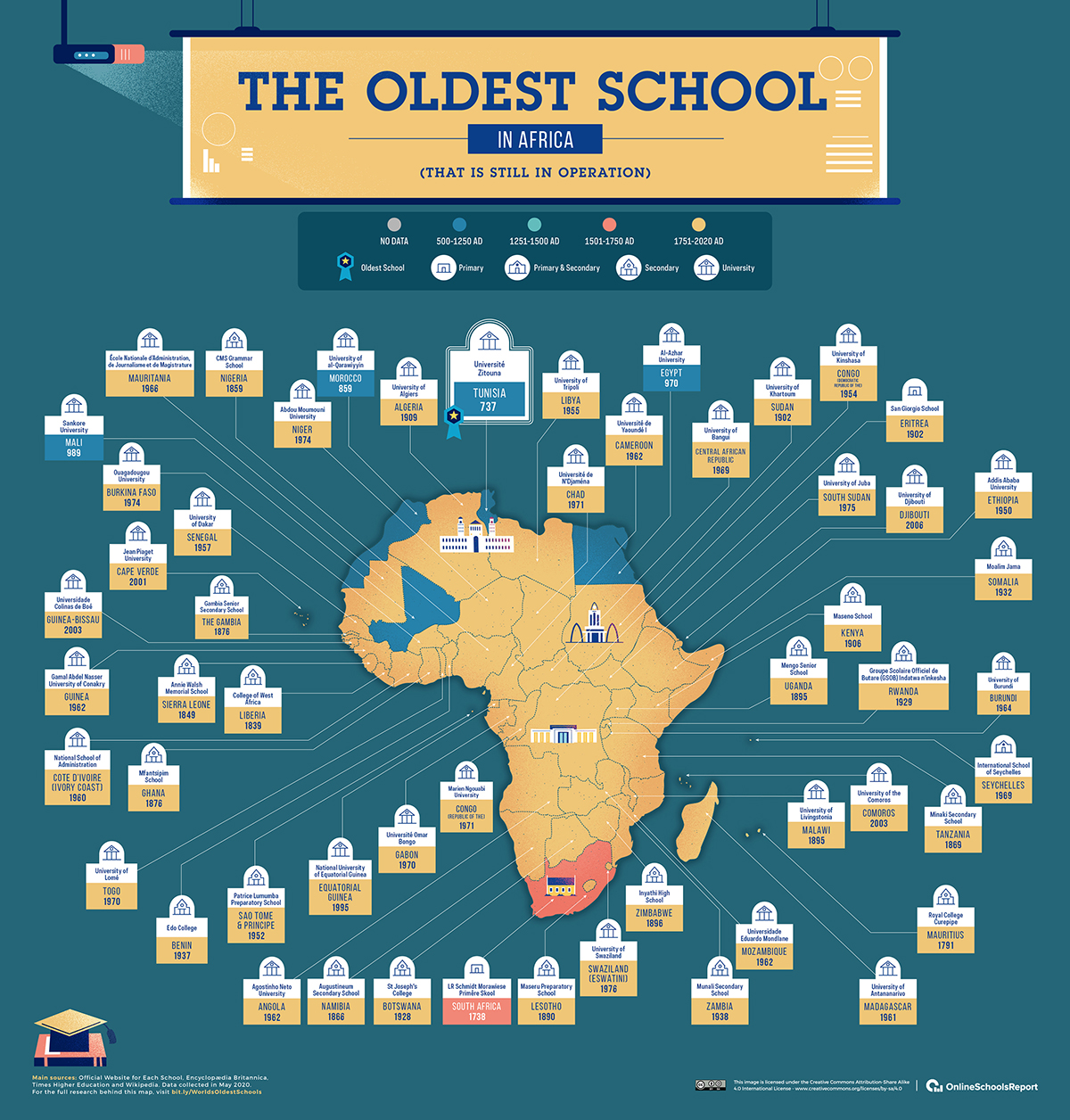 Imagine if you could look through the yearbooks of the world’s oldest schools. Would schoolkids in Han dynasty-China have the same cheeky grins on their faces? Would the hopes of Boston Latin School’s first seniors chime with those of today’s class?

Education is about progress, but, by necessity, it is also a process of continuation. Today’s educational environments look much different than they did when the world’s oldest schools were established. Today’s students can learn online without ever stepping foot on a physical campus.

Yet, the educational approach at many modern schools isn’t all that different from what it was hundreds of years ago. Today’s schools are still centers of learning where students gather to gain insight from experts in their fields. Schoolteachers and college professors today still lecture, just like teachers of old did. Teachers today still give their students opportunities to explore the world around them as a tool for learning, just as students did hundreds of years ago.

So, while “school” has changed in many ways over the years, many of the fundamentals remain the same.

What do you think has changed and remained the same in the longest-surviving school in your country?

See also: The Most Affordable Online Colleges in the United States and Why Study Art History?

To create these maps, we first consulted lists such as “The 100+ Oldest Schools in the World,” “List of oldest schools,” and “List of oldest universities in continuous operation.” We verified their accuracy by finding other sources to back up their claims. If we found the information to be correct, we added them to our map.

Every effort was made to ensure the data was correct at the time of publishing. We have verified the dates to the best of our ability, but it is possible that there are flaws in the data or older schools whose history is not so well-recorded.  For the full list of sources used to create this map visit bit.ly/WorldsOldestSchools 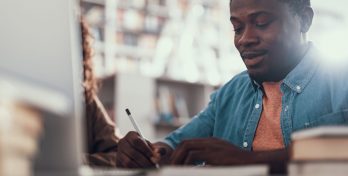 When it comes to applying for college, most students will need to factor data into their decision process. Whether this is acceptance or...